Chameleon Video On The Map In Madagascar

Chameleon’s global client Willis recently spread the news about our video to their 18,000 employees worldwide. And yes, the news hit their office in the big lizard’s native jungle of Madagascar. 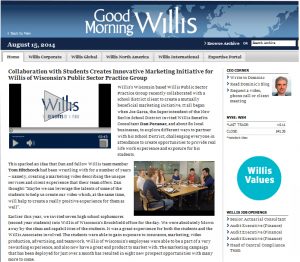 We are excited that news of our creative efforts made it around the globe in such a short time. Since we started telling creative stories last year we’ve had some awesome clients. Willis is no exception. Now the Chameleon has arrived in its homeland Madagascar.

Willis Wisconsin approached Chameleon to see how we could help them create a video that would result in a collaboration between Willis Wisconsin and students from the School District of New Berlin. The project resulted in 3 different videos: a corporate Willis video, the making of, and a blooper reel. Our first step was to brief the students on the plan, transport them to Willis Wisconsin via bus, and then ask strategic questions that would pull out their creative contributions. Chameleon also visited two New Berlin high schools and involved the students in many facets of production, editing, and on-site preparation. All of this was shot in Wisconsin and the result was a series of marketing videos that Willis currently leverages via YouTube, Brainshark, and through direct mail marketing.

How The Idea Was Birthed

For many years Willis desired to create a video that explained the unique approach the company takes with its benefit services. One day one of the Willis Wisconsin executives attended a seminar held by their customer who is the School District of New Berlin. The New Berlin School District was one of Chameleon’s first clients and we have colored the world with their story since 2013. It was there at the seminar that Willis saw Chameleon’s video work and the idea was spawned. Willis global described the video project as an “innovative marketing initiative” for Willis and the local Wisconsin office said “The management team here at Willis, both nationally and globally, really enjoyed the videos and wanted to share them with all of Willis.”

In short order, the news was spread worldwide and that is when we discovered it actually reached Madagascar. Our next goal is to shoot a video on the big island. We’re going strong towards anything that will make us turn warm colors.

Just a side note…Willis holds the naming rights to what was historically known as the Sears Tower in Chicago, Illinois. The Willis Tower is a cultural landmark and iconic Chicago tourist attraction. The Willis Tower not only offers amazing cuisine from casual to fine dining, it also has a bank, fitness center, hair salon, and even its own U.S. Post Office.

If you ever go there tell them Chameleon sent you and go to the 103rd floor to enjoy a 50 mile view of four states; no, you can’t see Madagascar from there.

The Dual Purpose of Content in Search Engine Marketing

The Inbound Pull and the Outbound Push